Home / Is your workforce surviving or thriving? The connection between mental wellbeing, organisational sustainability and performance

Is your workforce surviving or thriving? The connection between mental wellbeing, organisational sustainability and performance 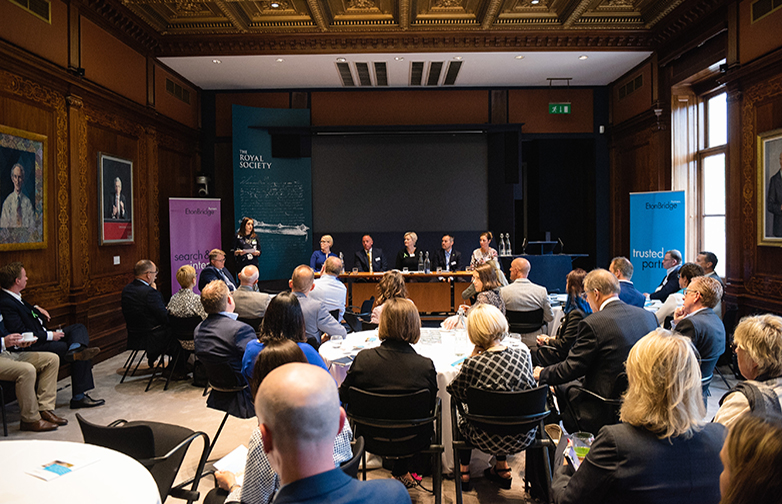 In May 2018, Eton Bridge Partners’ Human Resources Practice hosted our second annual discussion at the Royal Society in London. The event focused on mental health and wellbeing in the workplace, with a particular emphasis on its connection to both individual and organisational performance.

This event brought together a selection of speakers with combined expertise across various elements of wellbeing at work as well as some lived experience, and chaired by a passionate, knowledgeable and leading discrimination and employment law expert. The discussion, in front of an audience of senior HR leaders from across industry, was a fascinating insight into the challenges and opportunities presented by one of the core employment and social issues of today’s workforce.

Since our last event, there has been a significant increase in media and corporate discussion on the subject of mental health, both inside and outside the workplace, largely aimed at reducing the stigma of disclosing or managing mental ill health. While this is, of course, a positive shift, it is also true that much of the rhetoric remains focused on statistics and the argument for acceptance and normalisation of ill health, rather than a balance of practical prevention and recognition of diversity as opportunity.

At Eton Bridge Partners, wellbeing and positive mental health are really important to us, not just because it is the right thing to do, but because it genuinely makes real business sense. It sets us apart from our competition as an employer, but also because we have seen it enables performance and organisational sustainability. As executive search consultants, we witness both brilliant and shocking practices daily, as we dip in and out of businesses (and people’s lives) and sit in a privileged position, meeting people at pivotal, and often vulnerable moments.

The event Chair, Karen Jackson, kicked off the discussion by asking the panellists about the importance of senior level sponsorship, and whether a figurehead with ‘lived experience’ was critical to the success of changing behaviours in an organisation.

It is a commonly held belief that, without someone at the top willing to ‘declare’ their illness, any mental wellbeing strategy will flounder at early stages. Dr. Shaun Davis, Global Director of Safety, Health, Wellbeing & Sustainability at Royal Mail Group, shared the approach of their outgoing Chief Executive, Moya Greene, and also a Royal Mail sentiment – ‘what is important to my boss, is fascinating to me’. According to Shaun, this drives an interest across the organisation in core strategic messaging that has made the overall wellbeing agenda, ‘Feeling First Class’, part of the overall way of working rather than an isolated initiative and hasn’t relied on a single senior figurehead to lead the way using their own experiences.

At Skanska, the vision is for people to go home from work feeling better about themselves than when they arrive. This might seem ambitious, but for Lucy Jones, HR Director at Renault UK & Ireland, it is completely achievable, even though it relies on work being set up in the right way and ensuring everyone knows what is expected of them. This message, led from the top, is another example where lived experience at a senior level hasn’t been needed to start conversations across the organisation.

Discussion turned to the benefits of including wellbeing measures in an engagement survey. For Judith Grant, Director of Wellbeing at Mace, not only does this place the subject high up the organisational agenda, it also offers a measurable insight into organisational feeling and can highlight hotspots or challenging areas for increased Board-level focus.

Mace recently took the fairly unusual step of a full organisational wellbeing diagnostic, run separately from the broader engagement survey, which found a strong association between higher wellbeing scores and site performance. This enabled a robust debate at Board level about ongoing investment and the importance of the wellbeing agenda to business performance and sustainability.

This activity revealed that 41% of employees would not disclose a mental health condition at work, while this was better than the figures uncovered by the Thriving at Work report. Published late 2017, significantly, it also showed that 19% wouldn’t reveal such an issue at home either, and it is to be expected that this is reflective of the population at large.

So, is it all about numbers?

While measuring the status quo relating to wellbeing was seen as important in the design of future strategy, robust analysis of mental injury at work is also lacking, according to Karen Jackson. If a physical injury occurs in a workplace, it must be reported internally, and often externally, for full internal and independent investigation and rectification. This is not the case for mental injury – possibly because it can be difficult to prove that mental injury occurred singularly because of work (although arguably this can also be the case for physical injury), but also because mental injury is simply not a reportable issue. While this remains the case, the panel felt that it is still too easy for organisations to sweep causative workplace conditions or poor line management under the carpet and allow similar mental injuries to occur later.

Similarly, the measurement of current organisational health doesn’t have to rely on large scale projects or investment, and tools are available widely to support organisations who wish to identify pinchpoints and good performance in this area.

Role of the line manager

While senior level lived experience wasn’t a precursor to strong mental health strategy for our panel, line manager and leadership skills were to be universally valued and of much greater importance. For Royal Mail, recognition and relationships are key, not clinical mental health training. Expecting line managers to say thank you, and to take the time to really listen to their people, has had a huge cultural impact and is part of a wider dignity and respect discussion.

Lucy Jones was in agreement about the importance of the line manager in fostering strong relationships, but added that they were keen not to add the mental health remit to the line manager scope and that identifying and tackling concerns was not the singular responsibility of line managers. She did, though, remind the audience that very simple steps can be taken to assess and improve organisational health more broadly, such as monitoring the under utilisation of annual leave. In her view, this firmly sits within the remit of individual line managers who have a responsibility to safeguard the health and rest of their people, as well as ask questions if concerns are evident. Karen Jackson supported this view, but also added that organisations that seek to remove stigma and encourage conversations about mental health and wellbeing more generally will not only find that they see fewer ‘crisis’ situations but also that they are able to be more robust in managing mental ill health as well, finding mutually workable solutions either informally or via workplace mediation at an earlier stage.

The subject of Mental Health First Aid training was discussed at length, especially whether it forces discussion of mental wellbeing to remain only the remit of a few trained individuals, rather than being a broader cultural shift. Lucy Jones highlighted Skanska’s alternative approach to offering the course and the longer-term role of trained first aiders. Employees were offered the training without having to commit to operating in a first aider capacity afterwards. Instead, they were permitted to make informed decisions after the training about whether they felt able to formally offer these skills to colleagues. In addition, trained Skanska first aiders are known as ‘ambassadors’, removing the medical and clinical connotation from their title. This helped them and the wider population to understand that their role is no more to ‘fix’ someone with a mental health crisis or challenge than a physical first aider would be expected to fix a broken leg on site.

Dr. Shaun Davis explained that Royal Mail Group simply didn’t expect the overwhelming interest they received from all parts of the organisation in the MHFA training programme when it was launched. The challenge for Royal Mail therefore became how to keep those people engaged even if they didn’t see themselves as ‘active’ first aiders. Shaun brought the audience back to a comparison with physical first aid: no physical first aider would feel redundant if they hadn’t repaired a cut or dealt with a fall recently – instead, they keep their knowledge current and educate others (often just by their mere presence) about the importance of physical health. At Royal Mail, Mental Health First Aiders are encouraged to feel the same.

One key area of discussion, both during the event and at the post-event networking session, was the risk of mental health activity being simply ‘organisationally trendy,’ and ultimately nothing more than a short discussion of the current hot topic. As such, it was generally agreed that organisations need to commit to a longer term agenda, and be prepared for the internal discussion and employee expectations to change and evolve over time, from crisis management and education to prevention and proactivity.

Overwhelmingly, whether organisations have huge resources or very little with which to underpin their wellbeing activity, the panel and the audience were in total agreement in three main areas:

Firstly, it is important to be consistent; consider all employee messaging and how it all fits together. Steve Hoblyn shared a wonderful example of a business on the one hand encouraging people to have ‘difficult conversations’ about mental health, while at the same time driving physical health messaging by recommending people use the stairs to ‘avoid awkward lift conversations’.

Secondly, there is a real risk that, in a drive for results or efficiency, organisations forget that they employ real people with individual needs and that individuals need to feel like they are seen as individuals for the employment relationship to be at its most effective.

Finally, wellbeing and mental health in particular are not standalone concepts. Organisational performance has been shown to directly correlate with diversity of thinking and experience and encouraging a ‘whole self’ approach in employees can only foster this kind of environment. Our panellists were in total agreement that the wellbeing agenda doesn’t have to be tackled separately from the gender, sexuality, race or age diversity discussion – in fact, it is all part of the same continuum.

Our Panel for this event:

Olivia specialises in executive search for our HR Practice. Her background in HR, gained in various senior HR positions in a FTSE100 organisation, combined with her extensive general management experience, gives our HR practice a unique offering for clients and candidates alike.

At Eton Bridge, relationships really are at the heart of all we do and that starts with our own team