Diary of an Olympian – Winning the European Championships: Oliver Cook 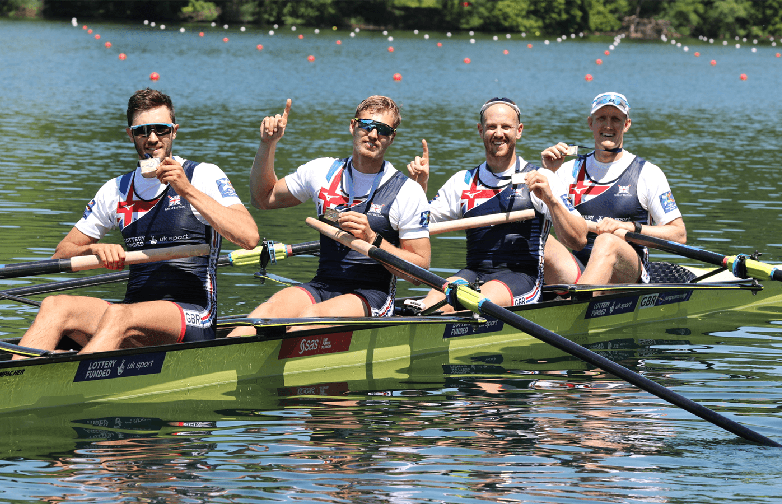 The weekend of the 3rd June was the European Championships on Lake Rotsee in Lucerne, Switzerland. The ‘Rotsee’ is, for many, the iconic rowing venue. It is a nature reserve in the shadow of Mount Pilatus, that has hosted international rowing competitions for almost a century. It is also home to the headquarters of the international rowing federation (FISA) and is perhaps better known in the rowing world simply as the ‘Lake of the Gods’. An old rowing coach of mine once said if you could choose a place to win, it is on the Rotsee, and indeed, it was very special.

The event that I was competing in was the men’s coxless four. We began our campaign on Friday with the heats, followed by the semi-final on Saturday and the final on Sunday. We won our heat, posting the fastest time, which gave us a good boost going into the semi-final. On Saturday in our semi-final we had a fast Polish four, who had won the first World Cup regatta of the season. The Polish four shot out of the blocks and were still ahead of us going into the final quarter of the race, we put in a push and passed them to win the semi-final by a couple of seconds.

In the final on Sunday we knew we were capable of being competitive, but we were also determined to have our best race first and then look to race the other nations. On the start line we were certainly aware that amongst the other countries we were lined up against were some highly decorated rowers. In the Polish boat was a four time Olympian, in the German boat two 2018 World Champions and in the Italian boat two 2016 Rio Olympic medalists. In our crew I was really the old hand, this being my seventh international season but for two of our four, Sholto Carnegie and Rory Gibbs – this was their first season in the team, and for Rory, his first senior international regatta.

The race itself went well; we had a good start and managed to move away from the rest of the field in the second half of the race. From my seat, in the bow, I could sense we were largely in control by the final quarter of the race but crossing the line ahead is always a very special feeling.

Nonetheless, even though we won and are European Champions, we still have two more international regattas and Henley before we begin our preparations for the World Championships. We also have more selection decisions within our highly competitive team so there is plenty more work to be done. But a good start to the 2019 season.