Eton Bridge Partners continue to sponsor Ollie and it’s been a long road to get here, no one could have predicted the delay to the Olympics. We are all proud of Ollie, his perseverance, and determination throughout his Olympic journey. Wishing him all the very best of luck for the next race in Lucerne, Switzerland – “World Cup II”.

Things are starting to heat up. It is a little more than two months now until the Opening Ceremony of the Tokyo Olympic Games. There are still reports swirling in the media about whether the Games will go ahead. While the reports are valid, it has been an important exercise for us to stay as detached as possible and focused on training and preparing as best as we can. The management of Team GB held a call for all athletes aiming for the Games last week. The call was to update us about the latest protocols in place for the Games. There is no question that there is an extraordinary litany of measures being put in place to keep us athletes, the staff, those involved in the running of the Games, and the local Tokyo residents safe. It’s clear that the postponed Tokyo 2020 Olympic Games will be like no other Olympic Games before; everyone is doing everything they can so the Games can be delivered as safely as possible.

It has been almost six weeks since the European Championships. The Europeans were a good start for the GB Rowing Team. We came away top of the medal table with 5 golds, 4 silvers and 3 bronze medals across the team. It was our first international race since the World Championships back in August 2019, and as we know, a few things have happened since then. It was a good start for us in the coxless four: We won our heat, the semi-final, and the final. As we crossed the finish line, I felt very proud of what myself and my teammates, Matt Rossiter, Sholto Carnegie and Rory Gibbs, have done to get us collectively there, knowing that it is also just the first step this season. It was a strange feeling being back in an international boat park, the familiar sights, sounds and smells of an international regatta – it felt good to be back.

Since we came home from the European Championships we’ve been training hard in preparation for our next international race, this week (21st – 23rd May 2021), in Lucerne, Switzerland. It is “World Cup II”, the second World Cup international regatta, in the annual World Cup regatta series. We are only racing this one World Cup before the Olympic regatta in July. We are really excited to race and looking forward to learning as much as we can. The field looks like the crews we raced at the Europeans, now also including one or two fours from outside Europe. It will undoubtedly be a step up in intensity from the European Championships.

The season is only accelerating from now on. After the World Cup regatta this weekend we have our final selection for the Olympics before we head on our final series of preparation camps ahead of the Games. The racing this week starts on Friday 21st May, with the finals live on the BBC Red Button on Sunday 23rd May (possibly BBC2 but not sure!). Our collective attention has been on dialing into the process.

“With the big event starting to appear on the horizon, we are doing what we can to narrow our focus, finding improvement in each session, each race, and each stroke.”

The men’s four (M4-) of Ollie Cook, Matt Rossiter, Rory Gibbs and Sholto Carnegie took the gold after a dominant row which saw them leading the field from early on. Speaking after the race, Matt said: “We got out well – it probably wasn’t our cleanest start but then Sholto set a good rhythm in the middle where we were just pounding away, taking a little bit out every stroke. I make the calls for the boys, and they made my job so easy because we were just nudging ahead every stroke. It feels like a real privilege to be able to be in front of the race and watch it all unfold.  I’ve been rowing for GB since I was about 18 and I’ve never had that before, so to have that here and in the Europeans has been a good feeling.” Sholto added: “We’re really satisfied. I thought we executed a good plan and it’s a very fun boat to row.” – British Rowing 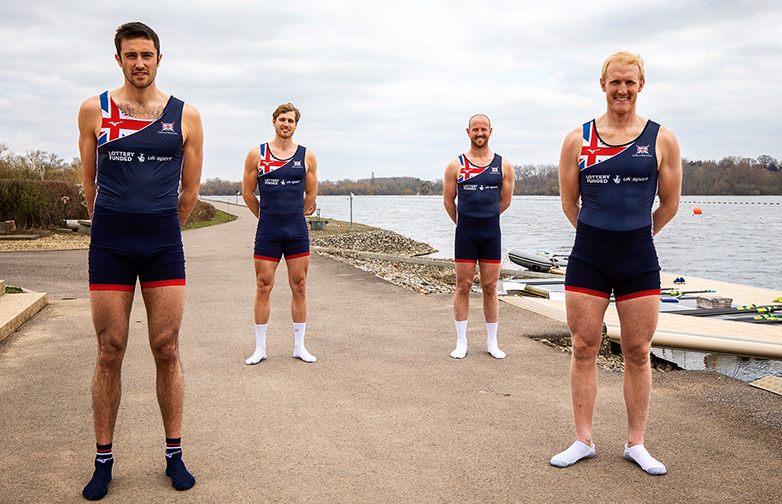